There are no upcoming events.

The Connection Cafe serves lunch five days a week to homeless and low income individuals and families in downtown Des Moines. Under the direction of a paid coordinator, volunteers from more than 30 churches, schools and civic groups donate and serve an average of 146 meals to 114 people on Monday, Tuesday, Wednesday, Friday and Saturday. In 2011, more than 2150 volunteers served 38,675 meals. 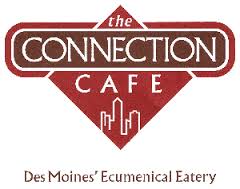 The Connection Cafe is a program created by The Bridge, a collaboration of four downtown Des Moines churches as part of their mission to minister to the poor. St. Ambrose Cathedral, St. John’s Lutheran church, St. Paul’s Episcopal Cathedral and First United Methodist church created The Bridge, which was designated a private non-profit 501 c 3 entity by the US government in 2001. Established as the result of a bequest to St. John’s, the Connection Café became a program of The Bridge as it sought ways to accomplish the goal of enriching the lives of those living, working or worshipping in downtown Des Moines. The Bridge is governed by a Board of Directors representing clergy and members from the collaborating churches.

For the calendar year 2011, the Connection Cafe served more than 38,500 meals with the average assistance of about 8 volunteers per day. Over 7,500 volunteer hours were contributed to the preparation and serving of the meals, whose estimated value was about $70,000. The need continues to grow. During the past year we have seen an increase in number of meals served over the previous year. Also, we received more than $187,000 in non food “in-kind” contributions in 2011. This includes donations of volunteer hours, office space, serving space, clothing and other contributions.